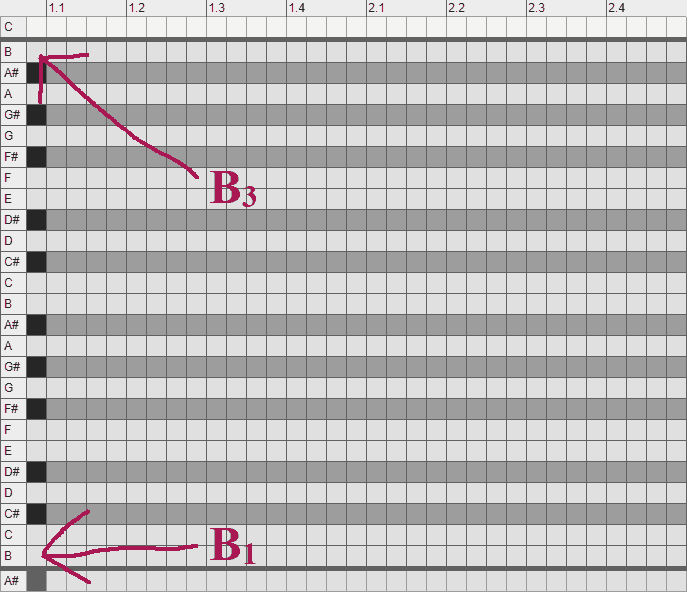 In many EDM tracks (songs) is the bassline the most crucial element. There is an extreme amount of music theory and information about making basslines, which can be very overwhelming. In this post, you can learn some music theory and some practical steps with methods by which we can make a bassline relatively simple.

How to compose (make) an EDM bassline? We can make a bassline in three steps, which are:

In this post, you can learn how to make an EDM bassline in four sections. First, there follows some music theory, and after that, there are three sections that are three steps about making the basslines. At last, there three related questions.

Some Music Theory for Pitching Notes

A musical key is a group of pitches, and each of these pitches has a unique relationship with each other. However, such a relationship is a topic beyond the topic of this post. An example key is “E minor,” and it has the pitches: E, F♯, G, A, B, C, and D.

Most of the time, only one musical key is used in a full EDM track. So, all the pitches used in the track consist of those from a chosen key.

Minor musical keys are in EDM way more common than other keys such as major keys. A possible reason for this popularity is that minor keys can sound serious. Further, some popular and safe choices for minor keys are A, C, E, and G.

Of course, choosing a minor musical key or choosing one of the mentioned keys is not a requirement. For example, here is track in the key D♭ major: Armin van Buuren – My Symphony (The Best Of Armin Only Anthem).

When we are pitching musical notes, then we should only choose notes that are in the chosen key of the whole track.

There are always people who believe that is not always needed to stay in key. However, I don’t know a track with notes outside of the key. Therefore, my advice is always to choose notes from a chosen key (stay in key).

A Bassline Doesn’t Play Notes Simultaneously Except with Portamento

Bassline Notes in the Bass Region

The Tension of the Fifth and the Seventh Note

The Chords Are a Guideline

If there are already chords, then there are two good practices for making basslines.

The first good practice is to use most (or all) of the same notes as the chords, but then in an octave below and with possible different note lengths, timings, and rhythm. An exception to this first practice is the second good practice, which is pedal harmony, and section 3.4 explains this practice.

Here is an example with four chords (a chord progression) in the upper part and a bassline in the lower part. Most (not all) of the bassline notes match (with different note lengths, timings, and an octave lower) the notes in the chords.

Switching to a Different Pitch

If we want to have a bassline that consists of musical notes in more than one pitch, then we should have at least one pitch change between notes.

For changes with a pitch distance of zero and one, it does not matter when the change happens, which is probably the reason why people call it a safe change in pitch.

It is common for EDM basslines that they get repeated, which is the case for probably all EDM tracks. Repeating is something natural in basslines and can happen in three ways, which are:

Repeating a bassline is extremely common since it is an easy and effective way to make a bassline longer.

Our brains follow the rhythms of basslines easier than those of other higher-pitched instruments. Therefore it is, most of the time, a good idea to give the rhythm of a bassline some extra attention. However, this does not mean that we should make it more complicated.

On this site, there is a blog post about music note rhythms that probably has all the information we need about bassline rhythms. A summary of the most important things from that post follows here.

An effective (probably the best) method is to copy a rhythm from other elements, for example, a drum rhythm.

The other way around works too, first make a bassline rhythm and then use that rhythm for another element. However, that is out of the scope of this post, since that other element is not a bassline.

Every rhythm has a length, which is almost always in bars. Moreover, every rhythm length is allowed. However, I only recommend a few possible lengths to use.

The rhythm lengths that I recommend are also by far the most common in EDM, and are:

If you don’t count the 1 bar length, then all the lengths listed here are an even number, which makes them hopefully easier to remember.

As mentioned in the “Repetition” section above, it is common that rhythms in EDM basslines get repeated, which is the case for probably all EDM tracks.

You choose a key on how it sounds while playing music notes, and you can’t make a wrong choice since it is always opinion based.

If we have already elements in our track, like chords or drums, then we should use the same musical key that these elements use. Yes, percussions like drums can also have a pitch.

If we have elements in our track and we don’t know the musical key, then that can be a problem, if we care about it. This problem is also out of the scope of this post and becomes the subject of another post. I will add the link to that post here when it is available (I have to make it first).

First of all, a bassline can stay on one pitch, and a bassline with more than one pitch doesn’t have to be more effective.

For example, when you have a bassline rhythm with all the music notes on G2, and you love how it sounds, then you can skip this whole section.

If we don’t want to use one of the methods below, but only want to use the theory from the section above “Some Music Theory for Pitching Notes,” then we can also compose a great bassline.

The purpose of this section is to give methods that we can use to pitch music notes, such as the music note rhythm from step one. Moreover, in some situations, it is possible to combine multiple methods. The subsections here below are those methods.

Call and response is a common music pattern, and we can apply this pattern also with the pitches of music notes.

The method “From one to five, to three, and maybe to six” has maybe a strange name, but this is because it doesn’t have an official name, at least as far I know. This method became popular (or more popular) with the video and book: The Unanswered Question: Six Talks at Harvard by Leonard Bernstein. In this book and video, Leonard explains the method in Lecture 1, “Musical Phonology.”

For some reason, “The Unanswered Question” is pretty well-known, but I have never seen someone explain the method “From one to five, to three, and maybe to six.” However, there are many musical elements (like basslines and melodies) in many tracks that sound like they followed this method.

We can use the method in four steps, with two possible extra steps, which are:

3.3. Copy and Transpose Music Notes Pitches from a Melody or Chords

To perform this method, we need a melody or some chords since we use the music notes pitches of those elements.

We can do this method in four steps, which are:

Here is an example with a melody in the upper part and a bassline in the lower part. The bassline is almost an exact copy of the melody, but it is an octave lower, and some note lengths are different.

If we have copied notes from some chords and we want to remove stacked notes above each other, then it is a common and good practice to leave the root note. Most of the time, the root note is the bottom note of the chord, but not always since the chord can be inverted.

Inverted chords can be a topic that is extremely hard to understand, and it has not so much to do with EDM basslines. Therefore, I won’t explain it here, but if that is a sort of a problem for you, then I suggest making chords yourself. So, you know which chords are inverted if you choose to do so, and you don’t have to invert chords.

If you want to learn to make simple and effective chord progressions (chords), then there is a post about making such chords on this site that can probably help you.

With pedal harmony, we choose a pitch within the musical key, and we only (or almost only) use that pitch for an element, which is the bassline in this case. Usually (not always) the first pitch of a key (the tonic) is the pitch to use in this method. If our bassline rhythm (from step 1) is on one pitch within the key of the track, then we already use this technique.

Here is an example with six chords in the upper part and a bassline in the lower part, and all the bassline notes are on the first pitch of the key.

Ostinato is an Italian word and means stubborn. An ostinato bassline is a bassline that does not change during multiple sections of a track, and also does not have to change when the chords change.

An ostinato bassline should still work with the chords, as explained in the section “The Chords Are a Guideline” above. Moreover, using 7th chords in your track can help since it gives more pitching possibilities for the notes.

It is not strange for an ostinato bassline that we will letterly hear it the whole track unchanged, from the first second to the last second of the track.

Here is an example with four chords in the upper part and a bassline in the lower part. All of the bassline notes match (with different note lengths, timings, and an octave lower) the notes in the chords. This bassline is 2 bars long, and we can repeat it over the whole track.

Here is another example that is almost the same as the previous example. The only difference is that this bassline is 1 bar long. Therefore the bassline repeats more often and is in a way a bit more an ostinato bassline.

Should we make (compose) a bassline before a melody or chords (chord progression)? No, we can make first a bassline and a melody/chords afterward, and it is not necessary that a bassline works in harmony with melody/chords.