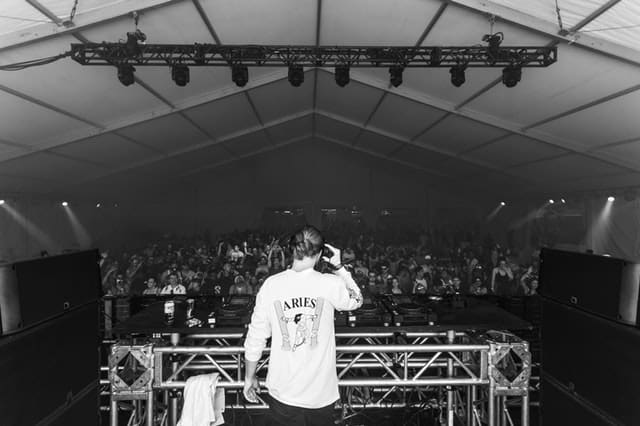 I’ve always enjoyed electronic dance music (EDM) and all the different DJs and genre’s that exist. The thought crossed my mind of even pursuing a career as an EDM DJ, but I thought, wait – maybe it is too late. That piqued my interest, and I started to research just how long it would take.

While there is no definitive answer I can give you, there are examples of the biggest DJs in EDM at which we can take a look. We’ll also cover some valuable tips on becoming a successful DJ.

The Amount of Time It Takes to Become a Professional DJ

The amount of time it takes to become an EDM DJ (or for that matter, any DJ) is ultimately up to that person. It’s like asking someone what their height is. Most people will give a different answer to that question.

For some people, it can take a couple of months, while others may see success after a couple of hard-working years. Let’s take a look at some famous DJs quick history:

Comparing Zedd and Skrillex’s History of Early Childhood and Success as a DJ.

Note: I researched on Wikipedia and other biography sites to find this information.

It looks like both Zedd and Skrillex DJ’d for only a few years before finding success, and maybe we can do the same. Theoretically, sure, it is possible, but take a look at their prior music background.

Zedd was born into a musical family where both his parents were musicians, and he learned to play the piano at the age of 4 years old. Skrillex was asked to be a guitarist in a band where he ended up being the lead vocalist as a young teen.

Most famous DJ’s have had prior musical experience for many years. There is almost no way around putting in the hours of hard work it takes to become successful in this industry, and of course, there are some exceptions.

Speed Up Your DJ Success

So now that we’ve covered how long it may take to become a professional EDM DJ, some things can help you to stay on track and may result in a faster success. Success is never guaranteed, but those who keep at it have a higher chance of getting to the finish line.

Knowing the Software and Hardware Equipment

In most situations, having an understanding of DJ and producer software and hardware is essential. Therefore, don’t delay learning to use these things.

There is something to keep in mind. If you are the best DJ in the world, but no so many people can hear your DJ skills, then it does not result in more success. So becoming better at DJing should probably most of the time a less high priority than the other things by which you can improve your success.

Same as for producing music. If you produce the best music in the world, and almost nobody hears it, then you don’t get success from it. So also here becoming better at producing should probably most of the time a less high priority than the other things.

If you don’t know what DJ equipment to get, then I advise starting with a DJ controller under 300 dollars (or euros). Furthermore, if you want to get software for producing music (like a DAW), then the best DAW is probably Ableton Live. I have based both recommendations on my opinion, and there are good alternatives.

Most people don’t know DJs for their DJ skills; they know them for their released music, the songs. When you want to get extremely big in the DJ world, then making (producing) music is essential, and of course, there are probably a few exceptions.

There are countless DJs (which I don’t name for hate messages) who suck extremely at DJing but play on the biggest and greatest festivals. That these DJs are that bad doesn’t for many people since they want to see the person that made one of their favorite songs.

You can get more success as a DJ with producing music.

There also ghost producers in this business that can produce music under your name, and ghost producing happens often. When you hear a song you like from a DJ like, then the chances are that DJ did not produce that song, but let someone else did, a ghost producer.

Of course, producing music yourself has the advantage that you learn how to do it and become better at it. Also, you know better what the possibilities are.

According to “Zedd’s guide to becoming an EDM overlord,” Zedd mentions that the M part of the EDM should be your focus. Zedd started with classical music before transitioning to Jazz and rock music. This passion for music is what drove Zedd to become one of the best EDM DJ’s in the world.

If Zedd isn’t your taste, perhaps David Guetta will do the trick. David Guetta studied American music trends while serving as a DJ at a gay night club in Paris, France.

You may not have to learn the violin at ten years old, but things like listening to a variety of music can help a lot. Many EDM involved creating something new out of a variety of different music styles and genres. For example, with diversifying your sound, a better understanding of non-EDM genres such as rock can help you.

Producing too much of only the same type of music can get you stuck. Of course, making music that looks like each other is not bad, but it is most of the time bad when it is too much.

The DJ and producer Marshmallow has most recently taken a risk. By combining his producing abilities with a metalcore band A Day to Remember, and their hit song Rescue Me. Marshmallow is no stranger to these types of risks as he’s partnered with Anne-Marie, Khalid, and CHVRCHES.

Same as with DJing. Playing a track most of the time that your audience expects can bore your audience or makes you just a DJ like many others. Also, your performing should be not too obvious. Knowing what the audience can expect of your DJ performance is good, but not too much of it.

A thing to keep in mind, when you are experimenting, it can work in a good way or in a bad way. However, the bad way is most of the time better than the boring and obvious way.

Try to Take Many Gigs

First of all for the people that don’t know what a gig is. A gig is a slang for a live music performance.

Taking gigs has at least some advantages, which are:

Probably the important thing to know is that many (or most) people find experience necessary. If someone asks you what your DJ live experience is, and you answer nothing, then that person can lose instantly his/her interest in you. Yes, people can work like that.

Before you become a professional DJ, taking gigs such as small parties and gatherings can help to work up to more serious gigs. When your DJ business gets enough recognition, you can open yourself up to larger parties or weddings. These types of shows can earn you $100 to $500 per show and can put you on display in front of larger crowds.

Your Look and Behavior Do Matter

The look you choose should fit your personality/act. If you have a rough/tough look with tattoos, but you communicate like someone with no confidence, then people can see you as a faker. For example, we don’t expect from a though biker that he/she keeps his/her head bow down to the ground and is scared to make eye contact.

Same as for DJs. The biggest DJs who perform on the biggest events are there most of the time not because they are so good. They are there because they have a popular name which sells tickets.

The last thing that can make life in this business easier are the right connections. Every connection is right, as long as they can help and are willing to help. The number of possible connections is endless, which means an endless amount of possible help.

As an example, Zedd made a call over to a producer friend of his because he had a track he didn’t know what to do with it. This producer led him to Justin Bieber, and they produced Beauty and a Beat together instead of discarding the track.

Developing connections can be a right time investment, but of course, you are always working people. Many people don’t help you for anything in return. Helping you costs at least time and time is precious.

Getting feedback on your creations can help you to improve your next creations. Not everybody is the right position to give you feedback, but it can still help.

For example, some people can tell you specifically what they don’t like, such as your that your mixing is bad in a specific situation. Also, some people can’t give specific feedback. However, if they always like your mixes, and they are in doubt an exceptional case, then you know at least something.

Also getting feedback on other things can be useful, such as on your looks, professionalism, and DJ business.

Don’t Give Up, Keep At It

After you make it to some level of professionalism as a DJ, you still can have none or very less fame and fortune. Probably you want to get that fame and fortune, or you want to have more of it. Although it is seemingly impossible to get these two things as a DJ, the right amount of dedication can land you in a pace to succeed.

Continue to do things like placing your creations such as DJ mixes and produced songs on your social media where people can listen to it.

Waiting for the call of the big players in the game is almost always only waiting (there are some exceptions), these things don’t tend to happen. These big players have nearly an endless amount of options, so you have to be extremely special to get contacted by them. So, you can contact them, but getting no response is standard since they have no time to answer everybody.

Another thing to remember is that this business is not 100% fair, the same as almost all other things in life. As an example, some people work 60 hours a week and get no success. However, some people have the right amount of luck and know the right person who helps to get success in this business.

At last, you should sometimes ask yourself if you treat this business as a hobby or as a business. If your threat it like a hobby, then it can be strange to expect the same results and success as a professional business can give. Of course, there are always some exceptional situations, but those are exceptions.