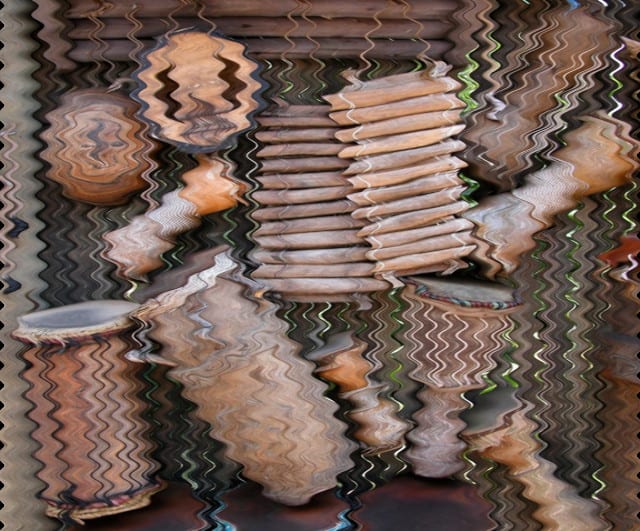 Things to Keep in Mind

This section explains some things that you should keep in my mind while reading this post.

I used the term harmonic here in this post, which means here a sound wave. So when something adds harmonics to a sound, we can see it as adding new sound waves.

A percussion is in this post a percussion musical instrument. We can make such instruments sound by striking or scraping them by hand or a beater, or strike them against another percussion. However, it is more common to use a digital version of a percussion and we most of the time don’t know for 100% sure how someone made it.

For example, all drums are percussions.

How Some Common Distortion Effects Work

This section explains the most common distortion effects used on percussions, with the why and how to use these effects.

Some distortion effects work by making audio clipping. Such clipping means that the audio volume of the sound is too high, so the audio hits a sort of a ceiling.

As good as every distortion effect tool has its own set of knobs. Companies can give these distortion tools extra knobs or change/rename some of the knobs. However, this section explains only the most common knobs for such tools.

The analog version works (most of the time) in a way that it boosts the audio volume of a sound, so it starts clipping and the audio folds. This folding produces harmonics, which gives the sound a richer tone.

When the distortion effect tool is digital, like a plugin, then it can work in the same way as analog, but it doesn’t have to. It works in the way how it is programmed.

With the drive knob, we can increase or decrease the distortion effect. Which means that when the effect we use is analog, then this knob controls how much of the audio volume gets boosted, with the amount of clipping.

By using the drive knob in small amounts, we can add a bit of warmth to the sound.

Analog stompboxes (effect tools) can only be on or off. However, many plugins have a mix knob, which is sometimes called dry/wet. We can use this knob to blend the sound of the distortion effect with the original sound of the percussion.

The higher the amount of the mix knob, the more of the distortion effect sound the tool adds to the original sound percussion sound. Furthermore, that added sound makes the audio volume of the mixed sound higher.

Some plugins automatically lower the audio volume of the mixed sound when the volume becomes higher. However, in some plugins, we have to do such compensating of the volume manually.

Some tools have a level knob, and some tools have a gain knob, but both knobs do the same thing. We can use this knob to modify the audio volume so that we can make the volume higher or lower with it.

A bit-crusher is a distortion effect type that can produce two distinctive effects, and we can combine these effects if we want. These effects are:

People often associate these two sound effects with the sound of the older analog drum machines, such as the LinnDrum and the Akai MPC60. Both these machines have a digital sound, and they use lower sample rates by which these digital sounds become tough and grainy.

The bit-rate knob is also called resolution. With this knob, we can reduce the digital bit-rate of a signal. As far as I know, this reducing is always from 24-bit (no reducing) down to 1-bit (maximal reducing).

The downsampling knob is also called frequency, but the latter name is confusing, at least in my opinion. Furthermore, with this knob, we can reduce the sample-rate frequency of a sound. As far as I know, such reducing starts always from 44,100 Hz.

The more we reduce the sample-rate frequency, the more new harmonics the tool adds to the sound. Moreover, when we reduce the frequency enough, then the signal can break down completely.

With the waveform shape knob, we can set the shape in which the tool decimates bits. The square folding is the most common and the one I almost always use. Furthermore, using square folding gives warm harmonics.

Tape saturation is a distortion effect type, which can produce the sound that we can get from making analog gear clipping. Such analog gear can be for example valve preamps and half-inch multitrack tape recorders.

We can add warmth and harmonic richness to a sound with this effect. Moreover, tape saturation can add a bit of an analog sound to a percussion.

The knobs of most tape saturation tools I know are to my opinion not worth to mention here. The reason is that these knobs look and work pretty much the same as the knobs from the overdrive, distortion, and clipping tools.a

We can distort a percussion in an endless amount of different ways. However, most of these ways sound too bad and are probably unusable. Here follows some information and methods on how we can distort every percussion that sounds good to the opinion of many people.

First, we have to choose which distortion effect type(s) that we want to use. I recommend selecting the types from the section “How Some Common Distortion Effects Work” from above.

When we want to choose distortion effect types, then it can help to know some common uses of them, which are:

The Ordering of Distortion Effects

If we want to use more than one distortion effect on a percussion, then we have to keep in mind that the order in which we add the effects impacts the result. The sounds of the effects we use will sum up in the order that we use them.

If we use overdrive as the first effect and tape saturation as the second effect, then the result is pretty different. The result is a sound with an added filth and roughness, but with a smooth analog harmonic warmness over it. Most people prefer this second version of ordering distortion effects.

Using two or more of the same distortion effect type after each other is not common, but we can at least consider it when:

If a distortion effect is not strong enough, then we can add one or more instances of the same effect behind it. By doing so, the effects stack on top of each other, which makes the resulting effect sound stronger than only one effect. However, we can also use the same effect from a different organization, if their tool has a stronger version of the effect, which can be easier to do.

When we have two or more different configurations of a distortion effect we want to use, we can add for each configuration an effect after each other.

A Bit-crusher Is Not Common on a Single Percussion

It is not so common to use a bit-crusher on a single percussion, but of course, it is possible, and there is nothing wrong it.

A more in-depth explanation of using a bit-crusher on a group or something similar is out of the scope of this post.

A Practical and Common Equalization Method

A general/detailed use of an equalizer is out of the scope of this post. Nevertheless, here follows a common method on how we can use an equalizer on a percussion. This method works well after one or more distortion effects, but also without such effects.

The First and Second Step

The first step, we copy the settings from the third (bottom) row to our added equalizer.

Secondly, we choose between the first and second row and then copy the settings from the chosen row. This choice depends on the percussion we use and on the situation in which we want to use the percussion. We choose for the second row if at least one of these cases is true:

In some equalizers, we can set the Q (bandwidth) of the high-pass filter and the low-pass filter. Using such an equalizer is not necessary. However, if our equalizer has an option to set the Q, then we set it on 0.7, 0.71, or default.

The optional third step is to adjust the frequency of one or both filters to our preference. Here follow some guidelines (not rules) about adjusting the frequencies of both filters:

For example, most cymbals (such as hi-hats or shakers) can have a the high-pass filter on 300 Hz.

Some people might wonder about the max 15000 Hz with the low-pass filter, which is to remove any hissing sound from the percussion.

The Most Common Method in Distorting and Equalizing a Percussion

Here follows in three steps, by which the second step is optional, the most common method in distorting and equalizing a percussion:

At this point, we have finished our percussion with added distorting and equalizing to it.