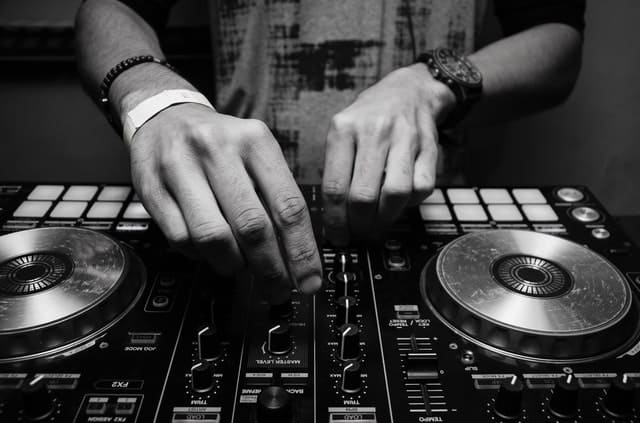 When people are talking/writing about DJs or similar subjects, then there are three words pretty popular, which are DJ mix, DJ mix set, and DJ set. Also, these words do all mean the same thing, and this post explains that meaning.

What is a DJ mix (DJ mix set)? A sequence of songs (tracks) that are typically mixed by a DJ so that the result appears as one continuous track.

When someone is at a festival, a club, or something similar, and there is a DJ playing, then it is almost 100% sure that the person heard a DJ mix. Such mixes sound almost always like one continuous track.

A DJ makes a continuous sounding track by mixing a track to another track. Therefore, we can see mixing most of the time as smoothly switching from one track to another.

With a DJ mixer, a DJ can blend (mix) two sounds (such as tracks) from sound sources together. By mixing completely from one track to another, then a track changed completely to another track.

Some well-known sound sources are:

The most classic sound source is the turntable. A turntable is the first DJ equipment ever that allowed a DJ to mix from one track to another.

Many DJs like to record their mixes so that people can also listen to the recorded mix, and the DJ can reach than a bigger audience by sharing the mix.

There are also DJs that pre-record their mixes before they play for a live audience. Afterward, they play the recorded mix before the live audience, which has, of course, nothing to do with DJing.

The most commonly DJ mixes are the electronic dance music (EDM) ones.

EDM came to America and Europe around the mid-1980s. In the late 1980s and early 1990s, many people categorized such music as “drug music.” One of the reasons for such categorization was that scene had a reputation with drugs. The scene included raves and clubs where drugs were relatively common.

Regardless, the EDM community has hugely grown, and we see this community almost all over the world. The community is especially visible at some extravagant EDM festivals. Festivals such as the yearly Electric Daisy Carnival (EDC) festival in Las Vegas.

While EDM is great to listen to, it is designed more for dancing. In most EDM tracks is the bass drum (kick) or the bassline the most important element of a track. These two elements are also the elements on which we can dance.

There are many EDM genres, and some of the more popular genres are House music, Techno, and Trance music.

These days probably most people have heard some EDM in their life, even if they don’t know what EDM is. Moreover, everyone can enjoy EDM (but not everyone does), and demographics or something else probably never matter.

A DJ mix set can last anywhere from one hour or much longer (5 hours or more), which most of the time depends on the event. To play such long mixes, a DJ has to play many tracks.

For a DJ to choose the right tracks, he/she tries to base that on five things, which are:

Of course, a DJ can not always know what the audience heard at the same event, especially at long events, such as 12 hour long festivals.

The tempo of the track in beats per minute (BPM) is part of the energy level.

A DJ has a list of the tracks that match the type of event/party/situation and the energy level of the audience. Then he or she should try to narrow that list even further down to only tracks that are harmonically mixable with the current track.

We can harmonically mix a track with another track by using the Camelot Wheel. However, there is software that can help you with harmonically mixing, such as mixing in key, which I don’t explain here.

The Camelot Wheel is an image with musical keys on it, which is easy to find by using Google. This image shows us wich keys sound harmonic with each other.

At last, a DJ can choose a track with his or her personal preference. However, the DJ should only make such a choice when there are two or more remaining tracks that:

Quality of the Tracks

While making a DJ mix, we do the track selection correct, and we do the mixing of the tracks correct, then it is possible to end with a bad DJ mix. It is possible by choosing tracks that are of low quality.

The source of a track determines the quality. Furthermore, it is good to know that many people like to talk about the quality of a track in the way how much they like it. However, they use the word wrong, and they probably mean the word “preference” instead.

Some poor sources that result almost always in a bad track quality are:

Of course, there are also good sources by which we can get tracks. As far as I know, these sources are always stores where we can buy music. Two of such stores are Beatport and Traxsource.

Some Places to Listen to Good DJ Mixes

By listening to good a DJ mix can be fun, and we can sometimes learn from it. When we listen to such mixes, we can discover tracks, and when we have some knowledge/experience with DJ mixes, then we can hear also mixing techniques.

There are many online places where we can listen to good DJ mixes. However, three of such places are probably to most popular, which are YouTube, SoundCloud, and Mixcloud.

For the people that don’t know these three places, we can make use them with a search query. For example, we can search “deep house mix,” which results in many found deep house mixes.

YouTube is probably the most popular of the mentioned three. We can watch videos about DJ mixes on YouTube.

SoundCloud and Mixcloud are similar and great, and we can listen to audio on both places, such as DJ mixes. Mixcloud is more specialized in such mixes, but we can find them also on SoundCloud.