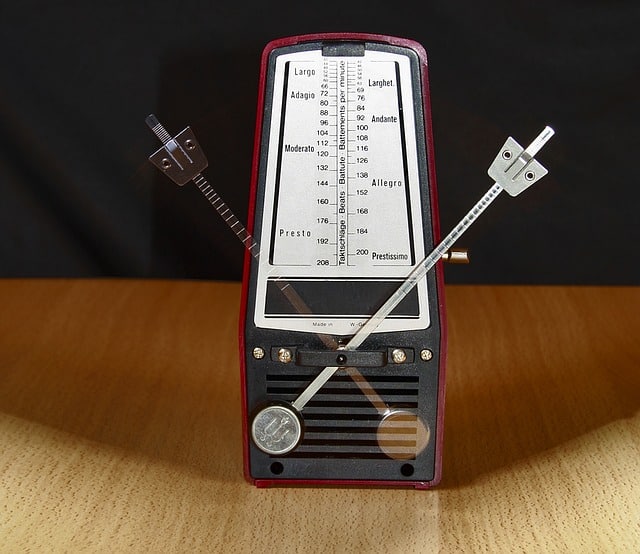 Every electronic dance music genre and other genres have a range in which the tempo of their music can vary, which is also the case for house music. We can express the tempo of a song in beats per minute (BPM). Furthermore, most people mean with house music, the genre, the subgenres of it, or they mean the genre with its subgenres.

Here is an extremely short explanation about the history of house music. Around 1979 the popularity in disco music started to decrease a lot, and around the early 1980s in Chicago, disco music evolved into house music. Furthermore, the first house track ever is Jesse Saunders – On and On.

The Tempo of Some House Music Genres

Here in the table here below are some (not all) well-known house music subgenres with their tempo range in BPM. As we can see in this table, the slowest tempo is 110 BPM, and the fastest is 135 BPM. However, this does not mean that there is not a house music subgenre with a slower or faster tempo.

House Subgenres with an Unknown Tempo

As mentioned above in the previous section, the house genre has many subgenres with some rare ones. Also, when time passes, this genre will probably always get some new subgenres in its collection.

Finding the Tempo of a Track

There are some (not all) methods by which we can try to find to the tempo of a track, which are:

These methods don’t always work, but will probably most of the time.

House Music on a Different Tempo, Can Go Outside Its Range

We can play and listen to a house music track (song) on a different tempo than its original tempo. For example, we have a track with a tempo of 118 BPM, and we play this track on a tempo of 98 BPM.

By playing a house music track slower or faster than its original tempo, we can go outside the house music tempo range. This range is a tempo that varies from 110 to 130 BPM.

A side note, playing a track faster or slower than its original tempo doesn’t mean it sounds better or something like that.

Reasons to Play House Music on a Different Tempo

Here follow some (not all) reason why someone would play a house track on a different tempo:

Reasons Why the 128 BPM Tempo Is Popular

The reasons why the 128 BPM tempo is popular is a big topic, and in my opinion, too big for this post. However, here are a few reasons, which are not complete and briefly explained, which gives hopefully an impression why the tempo is popular:

Originate of the House Tempo

The tempo of house music came directly with the first house music tracks ever. So, when the house genre came, it directly also had its tempo range, and there is no information about if that range became broader as time passed.

If someone is interested in checking how the tempo evolved, then there is a solution, which takes an extreme amount of time. The solution is to check as good as every track ever made up to now for its tempo.