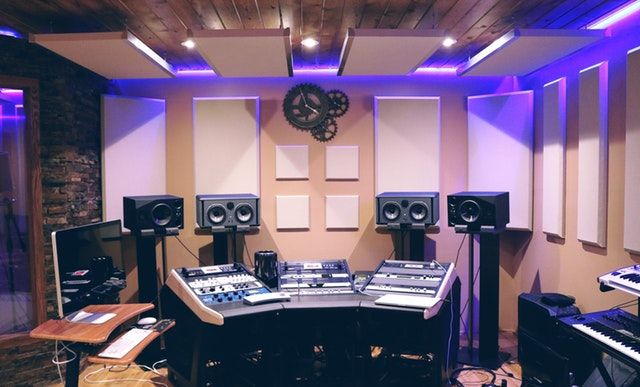 Accurate listening is essential for music production since then we can precisely hear what we do. Such a listening experience is possible on studio headphones and studio monitors.

Are studio headphones or studio monitors better for music production? From an accurate listening perspective, studio monitors are a better choice for music production than headphones, but only in an acoustically threatened room. Monitors can be the better choice since the speaker’s sound of one monitor can naturally reach both ears, not the case for headphones. Also, the speakers of monitors can be bigger in size than the speakers of headphones, giving them the potential to sound better than the smaller ones.

We should probably have two main goals when choosing between studio headphones or studio monitors better for music production. The first goal is getting a flat sound. The second goal is getting a sound that translates well to as many listening environments (such as room acoustics) as possible.

As mentioned by the Loudspeaker Wikipedia page, a loudspeaker is an electroacoustic transducer, which is a device that transforms an electrical audio signal to a corresponding sound. The page also mentions that the “loudspeaker” term may relate to individual transducers (also known as “drivers”) or to speaker systems consisting of an enclosure with one or more drivers. Further, the Electrodynamic speaker driver Wikipedia page explains that a speaker driver includes a diaphragm and is typically in a cone’s shape.

Headphones are a pair of small loudspeaker drivers that we can wear on or around the head over our ears, as mentioned by the Headphones Wikipedia page.

If we have the choice, we might want both the studio headphones and the studio monitors since they have their advantages over each other, which this post will explain.

Some people on a Quora page mentioned that we want both the headphones and monitors. On the same page, one person explains that we can take care of the overall sound with the monitor and use the headphones to approach particular/specific issues.

By equalizing the kick and bass in the wrong way can result in that the track has no foundation. Therefore, even pro’s with high-end mix rooms check their low-ends on headphones periodically, as explained by a LANDR page.

There are sound calibration tools by which we can improve our perceived sound’s flatness from monitors and headphones. Probably the most well-known of these tools are the software ones.

In every DAW I know, we can add features to it by installing a plugin. According to the Plug-in (computing) Wikipedia page, a plugin is a software component that adds a feature to a computer application.

The acoustics of the room we are in doesn’t influence what we hear through our studio headphones. Therefore, we don’t have to acoustically treat the room to improve the flatness of the sound we perceive through our headphones.

As mentioned by a LANDR page, a Quora page, and a Sonarworks page, studio monitors can sound flat (transparent). However, these pages also mentioned that the acoustic problems of its room do not sound flat.

The LANDR page also explains that room acoustics have more impact on the flatness of the perceived sound than studio monitors do. Therefore, using monitors in a room without acoustic treatment is probably not that smart to do.

An Acoustic Fields page and an Audiophile Review page explain that room size could also impact the sound’s flatness when listening to studio monitors. These pages also mentioned that the ratio of a room, height, width, and length could impact the sound’s flatness. Therefore, it might be impossible to get a good flat sound with acoustic threatening in some (not all) rooms.

An Arqen page mentions that the position of the person listening in a room and the positioning of the speakers influence the perceived flatness of the sound.

Costs of the Studio Headphones and Studio Monitors

When I look for studio headphones in stores such as Guitar Center, most of these headphones are under $500, and the most expensive ones are at the moment at $1799.

Most of these prices are the price of a single monitor. Moreover, most people probably want two monitors (which the crossfeed section below explains), which means double costs.

There can also be extra costs above the headphones and monitors, which is a bit off-topic for this post. However, some examples of such costs are an audio interface and a headphone amplifier.

The higher the impedance headphones have, the more resistance they have on a received electrical signal, which decreases the audio volume, as mentioned by a Digital Trends post. Therefore, a stronger headphone amplifier might be needed for headphones to listen at a good hearable volume.

First of all, for headphones, the loudspeaker size doesn’t matter, as explained by a Medium page.

Someone on a Quora page mentioned that larger speaker drivers are more efficient at producing low frequencies than smaller drivers. Some people also mentioned on the same page that bigger loudspeakers do sound better at the lower frequencies.

Crossfeed and the Sound of Room Acoustics

According to the Crossfeed Wikipedia page, the mixing of a stereo audio recording’s left and right channels is crossfeed. This page also mentions that the sound from one stereo speaker can reach both ears of a person and that the delay of the sound and sound level is different for both ears.

The Wikipedia page also explains that natural crossfeed does not occur in headphones. However, a crossfeed signal processor can recreate such a crossfeed by reducing channel separation (panning) and introducing sound delays for headphones, according to this page.

Studio monitors have a natural crossfeed, and headphones don’t. Therefore, the crossfeed solutions made with a crossfeed signal processor are only useful for headphones.

A good goal is that produced music sounds good in every room, which might be obvious for some people.

Some crossfeed solutions do more than reducing channel separation and introducing sound delays. These solutions also emulate room acoustics’ sound, which helps music production since it makes it better hearable how the music sounds in a room.

Some crossfeed plugins reduce channel separation, introduce sound delays, and emulate the sound of room acoustics. Such plugins are:

A crossfeed signal by a signal processor probably never sounds as good as a natural crossfeed since everything we hear has to come from two small headphone speakers. For example, the Abbey Road Studio 3 plugin has the possibility by which it tries to create the sound of pretty big speakers, which the user can then hear through headphones. Therefore, studio monitor speakers can (in a correct situation) have a better/flatter crossfeed sound than studio headphones.

According to the Listener fatigue Wikipedia page, listener fatigue, also known as ear fatigue, is a term for a phenomenon that happens after prolonged exposure to a hearing stimulus. The page also explains that listener fatigue symptoms can be discomfort, pain, tiredness, and sensitivity loss.

With headphones, we fatigue our ears faster than with monitors, as mentioned by a LANDR page. This page also mentions that the design of open-backed headphones should be much less fatiguing and much more transparent sounding than closed-backed headphones.

Ear fatiguing happens more while listening through headphones than on listening to monitors, as a LedgerNote page mentions. This page explains that the reason for this happening is that with closed-back headphones, the only place for sound waves to go is bouncing in your ear. This bouncing creates pressure on your cilia and eardrums.

Like myself, some people sometimes have sweat around their head while wearing headphones, as mentioned by a Reddit page. According to a few people on a Quora page, sweating can ruin headphones faster.

My head only sweats while wearing headphones in the hotter months of the year. In my experience also, sweat makes the headphones only dirty, and it does not ruin the sound quality of them.

As far as I know, studio monitors don’t introduce any sweat problems.