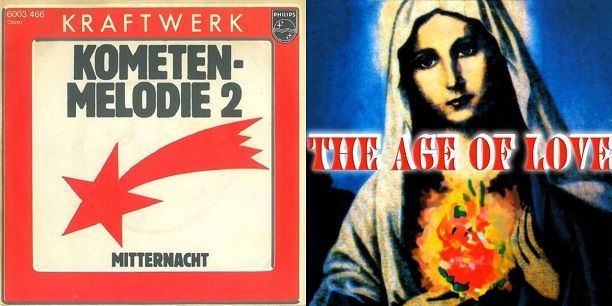 Every electronic dance music (EDM) genre started once with the first track (song) in that genre, which is also the case for trance. By knowing what the first trance track ever is, we can learn more about that genre, and it can help as a reference to judge other trance tracks.

What is the first trance music track ever? There are two possible answers:

The title “The Age of Love” is a self-titled track/song by the group Age of Love. Furthermore, this track is a well-known famous early example of trance music for many people. Of course, it is not that strange since it is the first official trance music track ever.

In March 1990 the Belgian label DiKi records released the track. This release was on the single “Age Of Love ‎– The Age Of Love” which was on a 12-inch phonograph record. Moreover, the single has four songs which you can see here in the table below.

The official genres of the single “The Age of Love” are:

There are two members in the group Age of Love, which are:

Furthermore, both members are from Italy. For the track “Age Of Love ‎– The Age Of Love” the group used vocals by Karen Mulder.

The group Age of Love only released one single, and after that nothing else.

Here follows some information about the artist that play an important role in the track “The Age of Love.”

Bruno Sanchioni is an Italian male, and he is known for his work as a:

Moreover, he has many aliases such as Rave Inspiration for example, under which he released two tracks. Also, he has been part of many groups, like Age Of Love (of course) and B.B.E.

Some see Bruno Sanchioni as the secret weapon of the DiKi records since he produced so many quality tracks for that label.

Giuseppe D. Chierchia is also an Italian male and born on 14 August 1952. Furthermore, he is an Italo disco artist, and his artist name is Pino D’Angiò.

He is most known for “Ma Quale Idea,” his hit song from 1980, which sold over 2 million copies in Europe. Of course, many know him also for his work in the group Age of Love, which is the only group he ever joined that produced released music.

Giuseppe Chierchia has written for many other artists, and Miguel Bosé is one of those. Furthermore, he received the Rhythm & Soul Music Award in 2001.

Karen Mulder is a Dutch female and born on 1 June 1968 in Vlaardingen, Zuid-Holland. She is known for her work as a:

Moreover, many considered her in the 1990s as a supermodel.

In the early 2000s, Karen Mulder experienced mental health problems. After those problems, she returned to her two professions.

There are many remixes made of the track “The Age of Love.” Also, many of those mixes are way more popular than the original version.

After that the first remixes became so popular, other artists also started to make remixes of the track, like Paul van Dyk did. Furthermore, the track “The Age Of Love (Watch Out For Stella Club Mix)” was hearable in the movie “Human Traffic,” which was about the UK club scene.

The tile “Kometenmelodie 2”, as mentioned in the introduction, is in English “Comet Melody 2.” It is a track by the German electronic music group Kraftwerk, and they named it after the comet Kohoutek.

Somewhere in June and July of 1974, the label Vertigo released the track in Germany and the label Philips released it in the United Kingdom. This release was on the single “Kraftwerk ‎– Kometenmelodie 2” which was on a 7-inch phonograph record. Moreover, this single was the second released single by Kraftwerk.

Both tracks in the single “Kometenmelodie 2” are instrumental, and the official genres of the single are:

However, you can see the first track “Kometenmelodie 2” also as an unofficial track from the EDM genre trance. Because this track has the characteristics of that genre.

Later in November of 1974, the labels Philips en Vertigo released the fourth studio album of Kraftwerk, Autobahn. This album also has the track “Kometenmelodie 2”, which is the third track on it. Furthermore, the duration of this track is on the album 5:48 minutes.

We can see now that there are three versions of the track “Kometenmelodie 2”, and they all differ at least in the track length. Also, the genres differ on the album Autobahn, which are:

Two members of Kraftwerk produced the single and the album, which are:

Also, Conny Plank helped with producing/making the single and the album.

Here follows some information about the artist that played an important role in the track “Kometenmelodie 2.”

Kraftwerk is a group where the members of it changed over time. So when you hear different music made by Kraftwerk, then it can be that you listen to different people that made the music.

Ralf Hütter is a German male and born on 20 August 1946 in Krefeld. Moreover, he is an electronic musician by which he is most known for his work for the electronic music group Kraftwerk.

He is together with Florian Schneider, the founding members of Kraftwerk. His known roles in Kraftwerk are:

Furthermore, before Kraftwerk, Ralf Hütter was part of the group Organisation in the years 1968 and 1969.

Florian Schneider-Esleben also a German male and born on 7 April 1947 in Düsseldorf. Furthermore, he is an electronic musician and a vocalist, and he is most known for his work for the electronic music group Kraftwerk.

He is together with Ralf Hütter the founding members of Kraftwerk. Before Kraftwerk, Florian Schneider was part of two groups, which where:

Konrad “Conny” Plank was a German male and born on 3 May 1940 in West Germany in Hütschenhausen. He became 47 years when he died from cancer on 18 December 1987. Also, he was married to Christa Fast.

Conny Plank is most known for his work as a:

Moreover, he helped to shape many innovative popular recordings of postwar European music. This music covers a range of music genres including krautrock.

In 1974 Conny Plank build his studio near Cologne, with the name Conny’s Studio. In this studio, he produced notable krautrock bands such as Cluster.

The band Cluster is in a way a special because he almost joined them. Furthermore, Cluster credited Conny Plank on the albums they had made.

Dieter Moebius and Conny Plank recorded together five Moebius & Plank studio albums. These albums were recorded between the years 1979 and 1986.

The sound of Moebius & Plank foreshadowed techno and electronica. Also, they influenced later musicians with their sound.

Conny Plank helped to configure the sound of the early records of Kraftwerk. In the 1980s Conny Plank’s services served a new generation of electronica-influenced artists, such as Eurythmics. Also, he produced pop and rock artists such as The Scorpions.

People called Conny Plank “the Phil Spector of Krautrock” for serving so many artists in the Krautrock music genre.

There is an official and an unofficial first trance music track ever, which we can find both in the introduction of this post. Both of these tracks have some general information about them, by which we can know the tracks a bit better. Also, by knowing some information about the artists that play an important role in the tracks, we can also know the tracks a bit better.