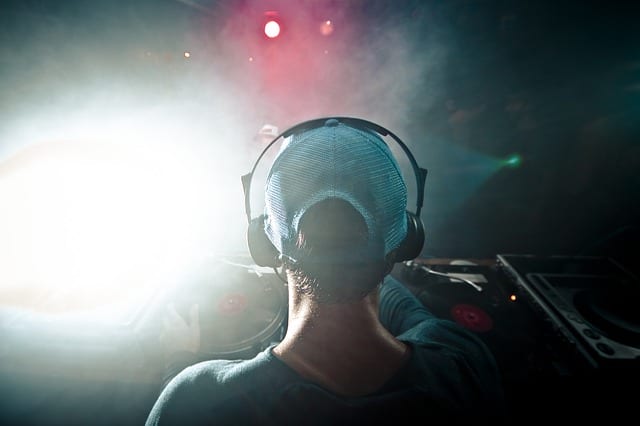 Many DJs wear headphones while DJing. Headphones have a few purposes for DJs, which this post will explain. Also, this post explains that headphones are not always necessary for DJs.

After this introduction, this post goes more in-depth about the reasons why DJs use headphones. Moreover, this post explains that headphones are not always necessary for DJs.

Preparing the next Song or a Different Audio Element

One of the primary reasons why DJs use headphones is to better prepare for the next song. When mixing from one song to the next song, a DJ has to make sure the beats from the songs line up accurately, or else the mixing is unsmooth and sounds bad. In most cases, such lining up means matching the bass drums (the kicks) of both songs.

While some songs have similar beat patterns, other songs are quite different. For example, the songs from the genres Dubstep and House have different beat patterns.

While the audience listens to the first song, the DJ can listen to the second song to figure out how to get it smooth into the mix. Without headphones, a DJ would have to this without listening.

After a DJ matches the beats of one song with a second song, then he/she can lower the audio volume of the first one and raise the volume of the second one. Such changing of the volume happens almost always gradually. Furthermore, a DJ is not limited to mixing two songs, since some gear setups support more than two, or even other audio elements than songs.

A smooth mix from a song to another song is possible without listening, but it can be risky. It is possible since many DJ gear has a beat-sync functionality, and they may have a visual representation of the songs in audio levels on screens. However, it is at least for two reasons risky to use this functionality/visual representation without listening, which are:

When a DJ can mix pretty well from a song to another song with listening through his/her headphones, then that person can also mix songs that he/she doesn’t know very well. Choosing such songs has at least two benefits, which are:

The Term Is Cueing

The official term for mixing a song to another song with listening through headphones is cueing. Knowing this term can help a lot in communicating about things like the mixing of a particular DJ.

Most venues where DJs work has a lot going on. Whether it’s a dance club or a private party, the DJ has plenty of potential distractions. The busier a venue it is, the harder it can be to stay focused on the task at hand: DJing.

From a big audience to other staff or performers, DJs don’t need any more distractions than necessary. While a DJ may not be able to block out visual distractions, headphones can help with auditory distractions.

A DJ is just like any other musician or performer. One distraction can throw off the whole performance if a DJ isn’t careful. Even experienced DJs may want to wear headphones while performing, so they can focus better on sharing music with the audience.

Clubs and similar venues can be loud. Not only can the noise be distracting to a DJ, but it can be harmful to one’s hearing. Enough exposure to loud environments can lead to irreparable hearing loss and damage.

Unfortunately, hearing loss is usually permanent. Once it’s gone, it won’t come back. That’s why DJs and other musicians need to do as much as they can to protect their hearing while they have it.

The louder a sound is, the less time you can expose yourself to it before it becomes dangerous, some examples are:

Probably the best ear protection is the use of some earplugs. Most of the time, headphones can start to function as some ear protection when a DJ has not his/her earplugs with them. The headphones that probably can protect our ears the best are the noise-canceling ones.

While headphones may not be safe all night, they can serve as a form of ear protection. Even if a DJ knows what songs they plan to mix and how to mix them, headphones can protect a DJ’s ears from the loud sounds in the club or similar venue.

At this point, in some cases headphones can have become a staple of the DJ look. While a DJ may need or want headphones for cueing the next song, they may have a completely different use for them. Sometimes, headphones may have no other purpose than an aesthetic one.

A DJ can even choose headphones to match their outfit or to match the vibe of the club or gig. The right headphones can do anything from elevating a DJ’s look to helping them create the best original mix.

There are many people who don’t like that some DJs can use headphones as accesiores since they think it might hurt the quality of the DJ mix set. However, some people like some stylish headphones matching a certain look of a DJ.

When to Go Without Headphones

For all of the reasons why DJs wear headphones, there are several reasons why they might not need them. While headphones can do more than help a DJ mix music, they can get in the way. If a DJ wants to leave the bulky headphones at home, they can still do their job well.

Many DJs can do the same things with earbuds as with headphones. Earbuds are small, and therefore it takes only a small space, which can be helpful while traveling. However, headphones can provide better audio quality to the DJ.

Earbuds can also like headphones protect ears (earplugs are better than earbuds), help staying focused, and they can be fashionable.

One reason why a DJ may not wear headphones is if they already know what songs they plan to mix. The DJ can familiarize themselves with the songs, and they can choose a tracklist that works well. They can practice mixing songs, and they can figure out how to mix one song so that it fits in well.

A chosen tracklist can consist of several songs in which a DJ has practiced mixing a lot with other songs. However, DJs can have already pre-ordered their songs in their tracklist. Moreover, they can have timed their songs when to mix from one song to another.

When DJs have already pre-ordered songs in their tracklist, it doesn’t allow them to pick a song that matches the audience’s mood or energy.

Some people have the opinion that when DJs have pre-ordered their songs, that they are not real DJs, but just song players. However, the biggest DJs can do such pre-ordering of their tracks. There are even famous DJs that pre-record their DJ mix sets.

For a DJ, to be able to correctly (not bad sounding) mix from one track to another without headphones is only possible with the right DJ gear. Also, as already mentioned, the DJ has to have practiced/know its tracklist. The right DJ gear means that it least has a beat-sync functionality, and they may have a visual representation of the songs in audio levels on screens.

If a DJ really wants an easy DJ mix set, he/she can choose the songs and record the mix before the performance starts. That way, the DJ will have everything ready to go, and all he/she have to do is to hit play on the recording. With everything already recorded, the full DJ mix set plays, and the DJ can enjoy the night like the audience or fake that he/she is DJing.

Hopefully, you know now more about some reasons why DJs use headphones. Furthermore, maybe you now also understand that DJs don’t always need to use headphones.

When you know someone who likes to know more about the importance of lyrics in EDM songs, then feel free to share this post. Additionally, do you know a not mentioned reason why DJs use headphones?