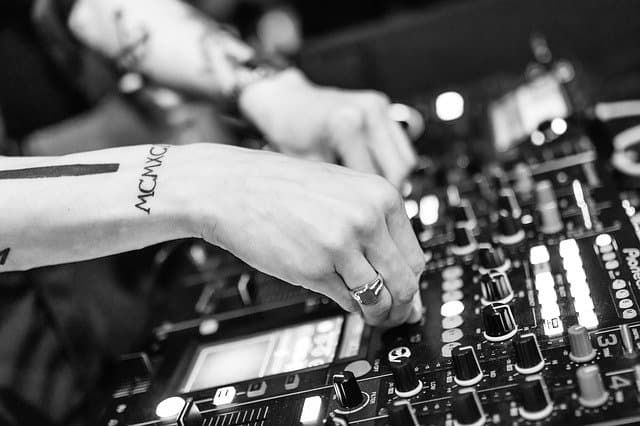 After this introduction, this post goes in-depth about the characteristics of techno songs that can make the mixing harder. Also, this post shows some techno song examples that can be good for practicing mixing.

Characteristics of Techno Songs That Can Make Mixing Harder

This section explains some song techno song characteristics, which we can use as guidelines. So, these explanations are not rules, facts, or something like that.

The tempo of songs is almost always mentioned in BPM (beats per minute) and determines how fast the song plays at default speed. However, we can play a song on a different tempo. For example, most DJ controllers can adjust the tempo of a song.

When we look at the techno Wikipedia page, we can see that the tempo of techno songs typically varies between 120 and 150 BPM.

The Tempo of Songs Can Make Mixing Harder

Most of the time, when the DJ changes the tempo of the current song subtly, it sounds better to the audience than an obvious tempo change.

Changing the tempo of a song can decrease its sound quality. Therefore, many people choose not to deviate more than 5% of the song’s native BPM, and some people not even more than 2% or 3%.

Non-percussion Elements, Such as Vocals and Synthesizers

Percussions (such as drums) are probably the most important elements in techno songs. There are techno songs with vocals, by which at least one vocal is well hearable and an important part of the song. The following explanation is about these vocal songs.

Mixing from a song with a vocal to another song with a vocal can also be hard. At least harder than mixing between a vocal song and a song without a vocal. This mixing can be hard since, at the moment of mixing, the audience can hear stacked vocals on top of each other.

Stacked vocals on top of each other can sound bad, and the individual vocals can become unhearable.

As far as I know, every song is in a certain key. A key determines for a song which notes instruments can play, influences which pitched percussions it can play, and similar things, such as the pitches of a vocal. However, there are exceptions possible, and we can break these “rules.”

A Camelot Wheel is visible in the image here below. In this image, we see keys, such as Cm and F♯M. When a key has a lowercase m, it is a minor key, and when it has an uppercase M, it is a major key.

A Method to find the key of a song is by using DJ software such as rekordbox, which shows the keys by songs.

We can use the Camelot Wheel in a basic way (there also more advanced ways) by first finding in the image the key of the song that we want to play or are currently playing. After that, left and right, and above or below from the found key, are the harmonically mixable keys. For example, when our current song key is in A minor (Am), then we can harmonically mix to the keys E minor (Em), D minor (Dm), and C major (CM).

The Energy Level of Songs

Every song has a certain energy level. Such an energy level can be opinion-based, and software such as Mixed In Key can provide the song’s energy level according to its rules.

We can base our energy level opinion of a song on the made choices in the composition of this song. This post will explain two of these choices: the BPM and the crowdedness of a song.

We Should Not Always Harmonically Mix Songs

Most of the time, when techno songs feel crowded, they also feel very busy. A song can get crowded when it plays many elements together, or that one or more elements follow a busy pattern. However, if a song is crowded or not is opinion-based.

There are also techno songs that feel minimalistic, and in this case, it is the opposite of crowded. A song can get minimalistic when it plays a minimal number of elements together, or that elements follow a minimal pattern. If a song is minimalistic or not is also opinion-based.

As already mentioned above in the ‘Key (Harmonic Mixing)’ section, the crowdedness of a song is a composition choice that influences the energy level of a song. Most of the time, the more crowded a song is, the higher the energy level.

The difference between a crowded song and a minimalistic song can be too much, which can sound bad while and after mixing. Therefore, it can become harder to make the mixing sound nice.

We can make the difference between a crowded song and a minimalistic song less, which can make the mixing easier, by mixing to a song that is between minimal and crowded.

Mixing from a crowded song to another crowded song can also be harder than mixing between a crowded and a minimal song. This mixing can be hard, at the moment of mixing, two crowded songs on top of each other can sound like chaos, in a bad way.

Techno Song Examples That Are Good for Practicing Mixing

The BPM and key information of all the songs in this section come from Beatport. Also, this section has linked every song here to the same song on Beatport.

A 128 BPM song in the key B♭ minor: stranger – Picklehead

A 125 BPM song in the key E♭ major: Avalon Emerson – The Frontier

A 128 BPM song in the key B minor: Inigo Kennedy – Plaintive

A 120 BPM song in the key A♭ major: Subjected – Symbiose

Techno Songs of at Least 140 BPM

Here follow some techno songs of at least 140 BPM chosen by me.

The Wikipedia minimal techno page mentions that the minimal techno genre is known for its stripped-down aesthetic. The genre exploits repetition with subtle and effective development. Therefore, minimal techno songs are minimalistic and not crowded.

A 130 BPM song in the key G♭ major: Plastikman – Hypokondriak

A 125 BPM song in the key B♭ major: Gaiser – Withdrawal

A 128 BPM song in the key F minor: Sleeparchive – Meson

Hopefully, you know now more about some characteristics of techno songs that can make the mixing harder as a DJ. Furthermore, maybe you find the techno song examples that are good for practicing mixing useful.

If you like this post, you may want to look at some posts in the Disc Jockey (DJ) part since this post is part of it.

When you know someone who likes to know more about what good techno songs are for practicing mixing as a DJ, then feel free to share this post. Additionally, do you know a not mentioned characteristic of techno songs that can make the mixing harder?