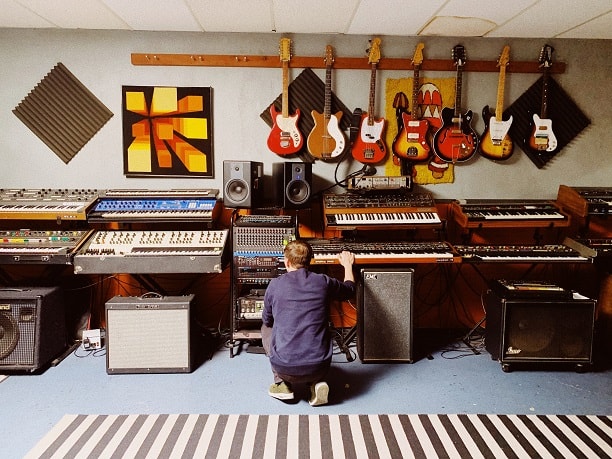 There are many powerful and good sounding synthesizers available that are capable of creating a full sound for a song element by itself. Yet, many people can still choose to use multiple synthesizers for the sound design of a single song element, such as a melody or a bassline.

After this introduction, this post goes more in-depth about some reasons why someone would use multiple synthesizers for sound design.

Almost every useful synthesizer has a unique sound. Even when we use two similar synthesizers with the same settings, then they sound similar, but it is very rarely the same. However, the differences between similar sounding synthesizers can differ from easy hearable to extremely minimal hearable.

For example, when we use two similar synthesizers with only a saw wave active. Then we might hear an obvious difference between these synthesizers, but that does not have to be the case.

A synthesizer can have more than one unique sound and can be in at least both forms. However, don’t blindly trust the advertisement of a synthesizer with the amount/type of unique sounds they can make.

Many people think that there is some synthesizer (like their favorite one) that can make a specific sound precisely like some other synthesizer. Those people can think that for various reasons, and a common reason is that the advertisement of that synthesizer says so. However, almost always, a synthesizer can’t make precisely the sound of a different synthesizer.

Probably the most common reason that most people like analog sounds is that they sound a bit organic and not perfect. Most people don’t like perfect sounds since people are not perfect themselves, and therefore imperfect feel more natural. Also, most of us see perfect sounds as boring and find that organic sounds are interesting.

As far as I know, there are three cases of synthesizers with an analog sound:

Analog synthesizers also sound in the way people made it, but their sound can differ a bit during some circumstances. For example, it is possible that when an analog synthesizer becomes older/more used that it starts to sound different, which can be very charming. Also, the hardware of an analog synthesizer can change (like shrinking) a bit when the place where it is in becomes warmer or colder.

Possibility of the Same Sound by Another Synthesizer

There is an endless amount of possible differences between synthesizers. Probably, the most common differences are the differences in hardware and algorithms. In this case, algorithms are digital calculations that influence the sound.

Another similar example would be that a company took over some other company. After the takeover, they rename/make another version of the synthesizer from the company that they took over.

To make the challenge of using multiple synthesizers with multiple types of sound synthesis effectively easier, we can use synthesizer presets.

Combining multiple synthesizers with multiple types of sound synthesis is not needed for sound design, and it does not have to make the result better or something like that.

As far as I know, at the moment, there is not a synthesizer that combines in a way multiple types of sound synthesis. However, maybe there will be such a synthesizer in the future, which can be interesting, but also hard to use (without presets).

Copying Sound Design from Someone Else

Many professional artists use presets for their songs. Some people think that using presets is a bad thing to do, but it is not. If the preset is what we need, it would be strange to force ourselves to modify it, with the risk we don’t like to modification.

Maybe (I don’t know) there are some legal issues with copying someone else his sounds and call it our own, especially a complete 100% copy. However, I think it would be strange if such legal issues are possible since a 100% copy can happen without knowing it. For example, when I make a simple square wave bassline sound, and someone does the same without knowing that did it also, then he/she did not copy me.

There are cases where someone copied someone else his/her sound design, without knowing why the copied sound design works. Also, they maybe don’t know why they use multiple synthesizers. However, it does not have to be a problem when we don’t know one or both of these reasons, but it might help us if we did know, like with learning about sound design.

The advantages of hardware synthesizers are:

The advantages of software synthesizers are:

A (too) simple example, we use two synthesizers that will play both the melody at the same and are together the lead element of the song. This lead sounds almost good, but the sounds together produce too much bass frequencies. We can solve this too much bass problem by removing or reducing the bass frequencies on one or both sounds with an equalizer.

It might be good to know that problems like too much bass from stacking sounds from multiple synthesizers can be hard to hear for some people. It can be hard for many reasons, like not having trained enough ears or not having good enough speakers.

Hopefully, you have learned something about some reasons why someone would use multiple synthesizers for sound design.

If you like this post, then you may want to look at some posts in the production part, since this post is also part of it.